This study proposes to examine how recent national championship coaches faired in their first four years with their team that would go on to win a championship versus coaches who finish 25th in the final AP poll. What are the conditions in which each of the two groups took over? How fast did each of the two groups achieve success and how well did they do in recruiting compared to each other?

For the data, I took the ten most recent national champions, head coaches. And the ten most recent coaches of the AP poll that finished ranked 25th. The goal was to see if there was any discernible difference in how these two groups performed in their first four years. I chose four years because after that there appears to be a lot of turnover at the coaching position. A key concept to keep in mind is that the championship coaches did not necessarily win a natty in the first four years (for example, Mack Brown of Texas and Dabo Swinney of Clemson took 7 and 8 years to win their first championships, respectively). Another important note is that the study measured how the coaches did in their first four years with their championship team, and not their first four years as a head coach overall. As such, Nick Saban (LSU and Alabama) and Urban Meyer (Florida and Ohio State) were in the sample twice. An interesting note is that Auburn’s Gene Chizik was in both data sets, as he won a title in 2010 and finished 25th in 2011. 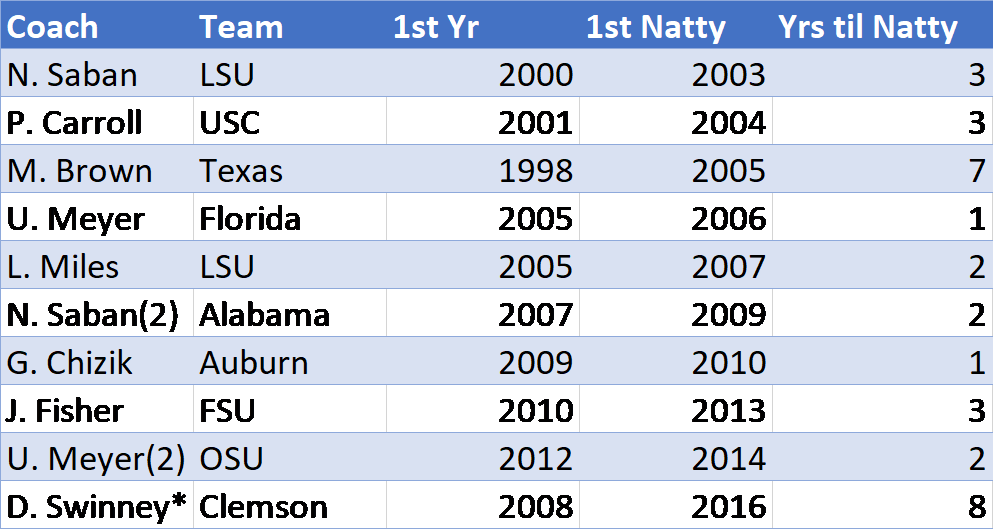 The ‘Champs’ and the ‘Chumps’, interestingly enough, both took over teams that were (on average) 6-6 the year before. However, the Champs went about winning more and steadily from there. The chart below shows this.

From the chart above, you can see that both groups started in the same spot. Year with new team marker #1 is actually the year prior to their taking over. Both groups were at .500. From there the Champs (blue line) rose more quickly and kept going up. The chumps rose in the winning percentage but dropped off considerably after year 3.

What about talent and recruiting? That has to factor in, right?

Yes. Using the four-year moving average for recruit ratings to determine the general level of measurable talent on each of the teams, I tracked the progression from the starting point and onward. The Champs typically took over slightly more talented teams (average rating of .739 to .706) but did a better job of infusing talent continuously:

Here, you can see that the champs started in a better position in year one and moved their recruiting averages up steeply before and never dipping to the level of the chumps. The scores are shown in the table below.

So, what does this mean we should expect from UF coach Dan Mullen? Only two Championship coaches took over teams that had 4 or fewer wins the previous year. Saban at LSU (3-8) and Brown at Texas (4-7). If you give Florida the extra win that would’ve happened had their game against whoever was canceled and say they would’ve been 5-7 in Jim McElwain’s last year, then you could add Chizik to the list of coaches that took over 5-win teams (Auburn was 5-7 the year before). This indicates Mullen may have a little more of a project on his hands than the usual championship-winning coach. But Mullen does take over a team with decent talent and recruited well talent-wise his first year (Florida has the nation’s 14th most talented roster and talent rating average of 90.75 in his first recruiting class). I will let the reader draw the conclusions as to what is fair for Mullen to accomplish in his 1st year. But I will say this- according to recent history, the first four years show a significant upward trend in wins and recruiting for coaches that win championships versus those who faltered.