As recruiting season heats up, there is a lot of attention being paid to how teams are able to add blue chip (4-star and 5-star high school players) recruits to their rosters. Just browse the internet and you will find a plethora of correlational analyses touting the importance of blue chip (BC) recruiting. There is no doubt that recruiting is important (after all, the coaches heavily stress recruiting success). To say otherwise is likely naïve and statistically unsupported. What gets missed in many of the conversations (at least in my experience) is the question of how important recruiting is relative to other factors. Where on the scale of ‘not at all’ to ‘all about Jimmys and Joes, not Xs and Os’ does impact of recruiting on winning really lie? Well, that of course varies from team to team, as each has their own situation. But we can explore a sample of talented teams to get a glimpse of the range that matters to most of us; the top 25.

To gain some insight as to the strength of the relationship between recruiting and winning, there are a few ways one could go about it. In this analysis, I look at the relationship between the top 25 most talented teams, as indicated by their Rivals 247 roster composite ratings, and those same teams’ regular season win percentage. Each of these teams’ BC percentage was used to analyze what their 2018 regular season win percentage would be expected to be as compared to the other 24 teams in the sample. To ensure the scope of what is being discussed here is not misunderstood, the purpose is to explore the expected impact on winning if predicted by roster BC%. This is not an exercise in predictive analytics- it is a review of what happened and exploring relative performance on a single, isolated variable that is discussed quite often- BC%. It is not intended to discuss all of the factors that go into winning (coaching, SOS, home field, etc.). It is intended to do just the opposite- flesh out how a top 25 most talented team should perform relative to their peers on the basis of BC roster percentage alone.

Now, to the data. The table below shows each of the teams in the sample. These teams were inclusion was based upon their average roster rating, as previously described. Then, their blue-chip recruit percentage was calculated. 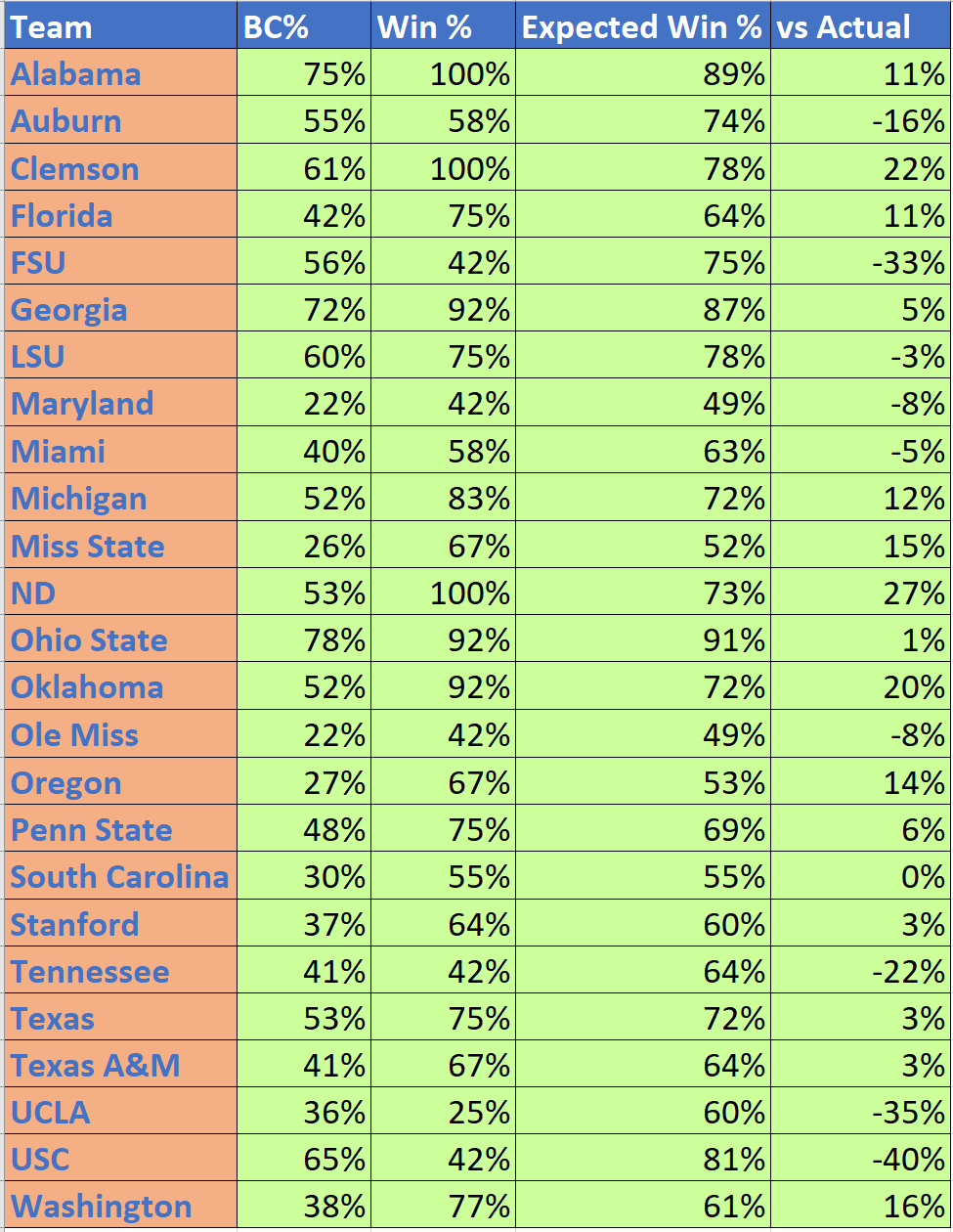 The above list is in alphabetical order of school. In the far-right column, that is how a team performed relative to what their BC% would have predicted. For example, Florida would be expected to win 64% of their 2018 regular season games on the basis of their BC% of 42%. The Gators won 75% of their games, 11% over what would be predicted by BC% alone. The top ‘over performer’ was Notre Dame at +27% with the most ‘under performing’ team being USC at -40%.

The above graph outlines where along a continuum each team would plot. Above the dotted line indicates ‘over performing’, below the line represents the opposite. I included some notable teams for illustration purposes. UCLA, even though their roster wasn’t stacked, still under performed. FSU did terrible.

Here is a scatter plot with each team’s data point entered:

A simple linear regression was performed to predict overall win percentage of the designated 25 most talented rosters, as determined by an independent scouting service website based on the team’s roster blue-chip percentage (BC%).  A significant regression equation was found (F(1,23) = 10.59, p < .001), with an R² of 0.315. Teams’ predicted win percentage is equal to 0.324 + .756 * X, where X= BC%.