I recently looked at how teams did relative to their overall roster talent in terms of winning percentage. You can check that out here: https://thefaircatch.com/2019/12/29/2019-expectations-vs-performance-based-on-overall-roster-talent-levels/

In this analysis, I drilled down a level and looked at offensive points for (PF) and defensive points against (PA) and compared the season average for each SEC team relative to their offensive and defensive talent rating. The findings kinda confirm what could be seen in watching the games play out. But there were some surprising finds as well. 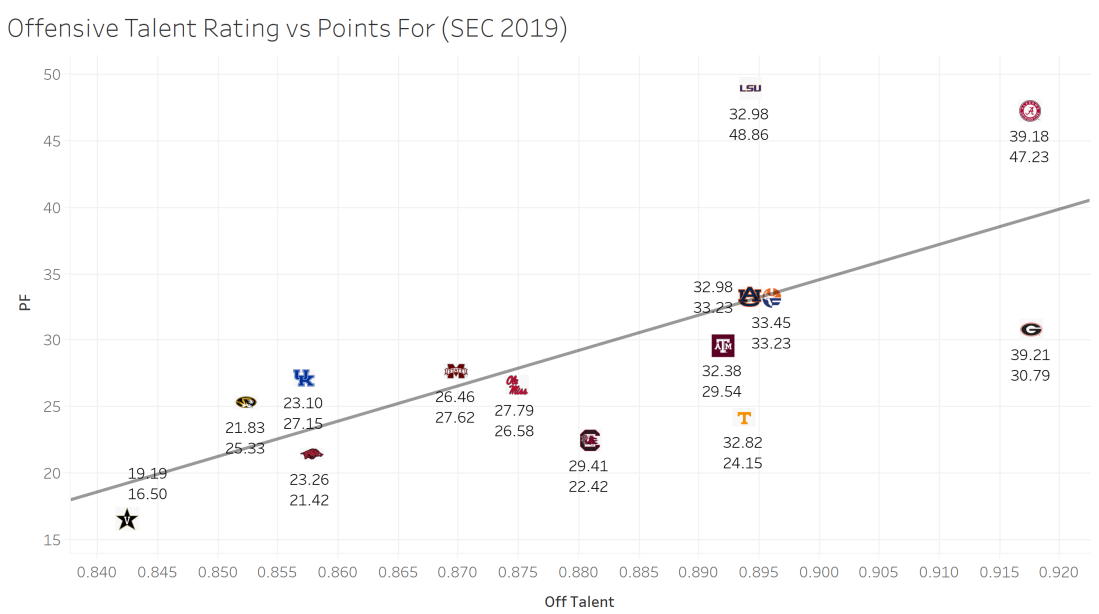 This linear regression model was statistically significant and met all assumptions. However, the goal wasn’t to form a predictive model here, but instead to see where each team’s performance fell relative to their peers and talent level. From the chart above, we can see that LSU way surpassed expectations. Georgia had the biggest negative disparity in points expected (the top number next to each team logo) vs actual PPG (bottom number). Doesn’t mean they had the worst offense- that was Vandy with 16.5 PPG. It just means they were further below expectations than any other team. Florida and Auburn performed right at expected levels. 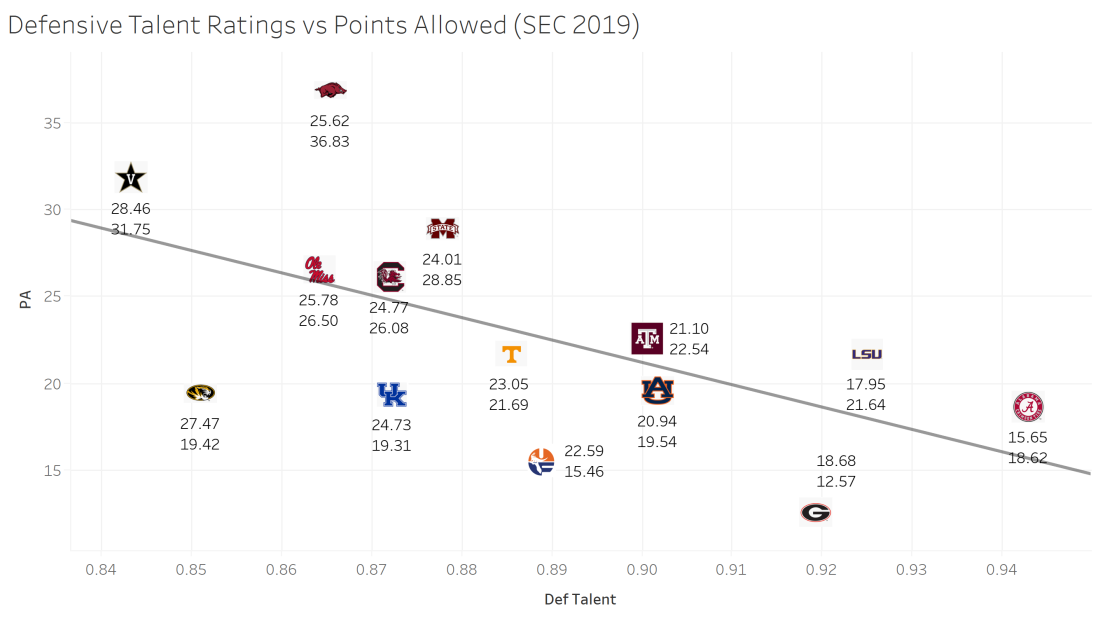 In the above graph, we have the inverse from the offense. In this one, a good performance is below the line. For example, Florida was expected to allow 22.59 PPG, but only allowed 15.46. LSU and Alabama, the Blue-Ribbon winners on offense, allowed a few more points than one would expect given the defensive talent ratings. Arkansas just had a bad season overall. Interesting to me, Missouri outperformed expectations in both metrics.

The small sample size is highly subject to variance. PF and PA as a stand-alone metric are not likely to be sufficient to determine the overall quality of the offense or defense. Overall roster talent allows for the inclusion of players that didn’t play (redshirts, transfers, injured, etc.) to influence the expectations but not the performance.

Both regression models were fairly strong. The correlation between defensive talent and points allowed was 57%, with 32% of the variance in points against attributable to the model. Offensive talent was correlated with points scored at 69% with 47% of the variance in points scored attributable to the model. What this means, in general, is that relative to this sample, 68% of what goes into points allowed are variables other than overall defensive roster talent and 53% of what goes into points scored are to other variables than overall offensive roster talent.

One thought on “2019 SEC Offensive and Defensive Performance vs Expectations”