All of us Gators have heard – 3rd and Grantham. We certainly feel it each week, but is it backed up by data? Yep.

Using EPA has a measure of whether a play was won or lost, I took a look at how each SEC team has performed thus far in 2020. Definitely not a good finding for UF, and confirms what a lot of us Gators already knew. Now we know it even more (if that is a thing).

In this bar graph, you can see a visual of just how poorly UF has performed on 3rd down.

The Heisman trophy is a prestigious award that supposedly goes to the best individual college football player. Whether that is true or not is not the point here. What is pretty much universally agreed upon is that it does go to a very good player, and usually that player is a key part of a winning team. That player is usually a QB and, as of late, an underclassman. But I digress…

Heisman winners obviously garner a lot of attention for themselves, but also for their program. Any coach who has a player win the Heisman has an obvious recruiting pitch to the upcoming recruiting classes. But does the Heisman actually help a program in recruiting in any tangible way? I decided to take a look.

Using 10 years of Heisman winners (2007-2016), I compared the team’s recruiting average rating from the 2 years prior to the Heisman year (HY), the HY, and two years post-HY. I was simply looking to see if there was an uptick in overall recruiting after the HY as compared to how the school was doing prior to and during the HY. Of course, there are several confounds that could impact recruiting along that 5-year stretch. As of this writing, I am not attempting to unearth those confounds, but to simply see if there is an upward trend.

The table above shows that the two years post-HY were associated with an increase in average recruit ratings in 8 out of 10. Again, there could be a lot of reasons for that, but in general recruiting appears to trend up after a school has a Heisman winner. Logically, having a Heisman winner shouldn’t hurt recruiting, and it clearly didn’t show any evidence of that here.

Using a straightforward approach of comparing points-per-play (PPP)on offense and defense, then calculating the difference, we can see how teams are doing overall. The difference was then standardized to give a sense of “distance” between teams beyond just that of ordinal ranking.

Below is how each team ranks in PPP overall, offensively, and defensively:

Alabama is looking like a clear number one. Florida’s offense is humming, but need to shore up that defense. Georgia is very close to Florida overall and can easily pass them as the weeks go on. Tennessee is performing pretty good through 2 weeks as well.

Write up to come – draft version

Points calculated based on number of wins and opponent rank.

Recently, an analysis of recruiting spending was put out (https://watchstadium.com/this-is-how-much-it-costs-to-land-one-of-college-footballs-top-recruiting-classes-07-24-2019/), and I thought it was excellent. It got me curious, so I used their data and ran a couple of correlations and plotted them. (I normalized all of the variables, correlation is below each graph).

As a Florida Gator fan, I hear a lot of fans groan about UF’s current recruiting. I understand it. From a composite ranking point of view, UF is doing quite well nationally, but is middle of the pack in the SEC (7th ranked in terms of team talent on roster in 2019, https://247sports.com/Season/2019-Football/CollegeTeamTalentComposite/?Conference=SEC). A lot of fans are also very happy with the improvement of the team since Dan Mullen took over, and expect the team to continue to improve and make a championship run. I’m an optimist, so I’ll go with the latter. But, to see where UF currently sits relative to previous SECCG participants, I took a look at the 4-year moving average (MA) of recruit ratings for each SEC team going back to 2003. And for fun, I looked at the SECCG results and found some interesting superlatives, which I put at the bottom of this post.

The density chart below shows the 4-yr MA for each team that has participated in the SECCG since 2003:

The vertical lines are the averages for each group. You can see the distribution is left-skewed. The outliers, as determined using Median Absolute Deviation (MAD) were all on the low end. I kept them in, as I don’t need a Gaussian distribution for this effort.

Florida’s current 2020 MA for average recruit rating is 90.41, which is 1.692 standard deviations above the national average. Looking at that same data table with heat mapping on the scores, you can see how teams have ebbed and flowed over the years:

A couple things are obvious from the table above. The first is that the SEC got much better overall around 2009-2010, Another is that UF clearly faded a bit from 2015-2018 in terms of 4-year MA. Back to the point: How does UF’s current average recruit rating (RR) rank relative to previous SECCG participants:

Here is the same data by year, which shows the difference between the opponents:

Where Florida Stands Now vs History: 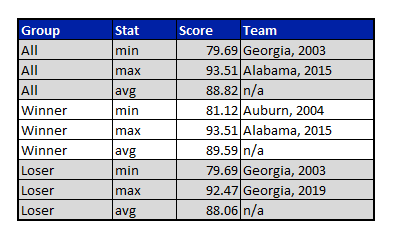 You can scroll across the table using the bar at the bottom.

There are a lot of articles about how it is important to successfully recruit talent in a school’s own state. Here is how each state did in terms of Blue-Chip (composite 4 and 5-stars) acquisition. 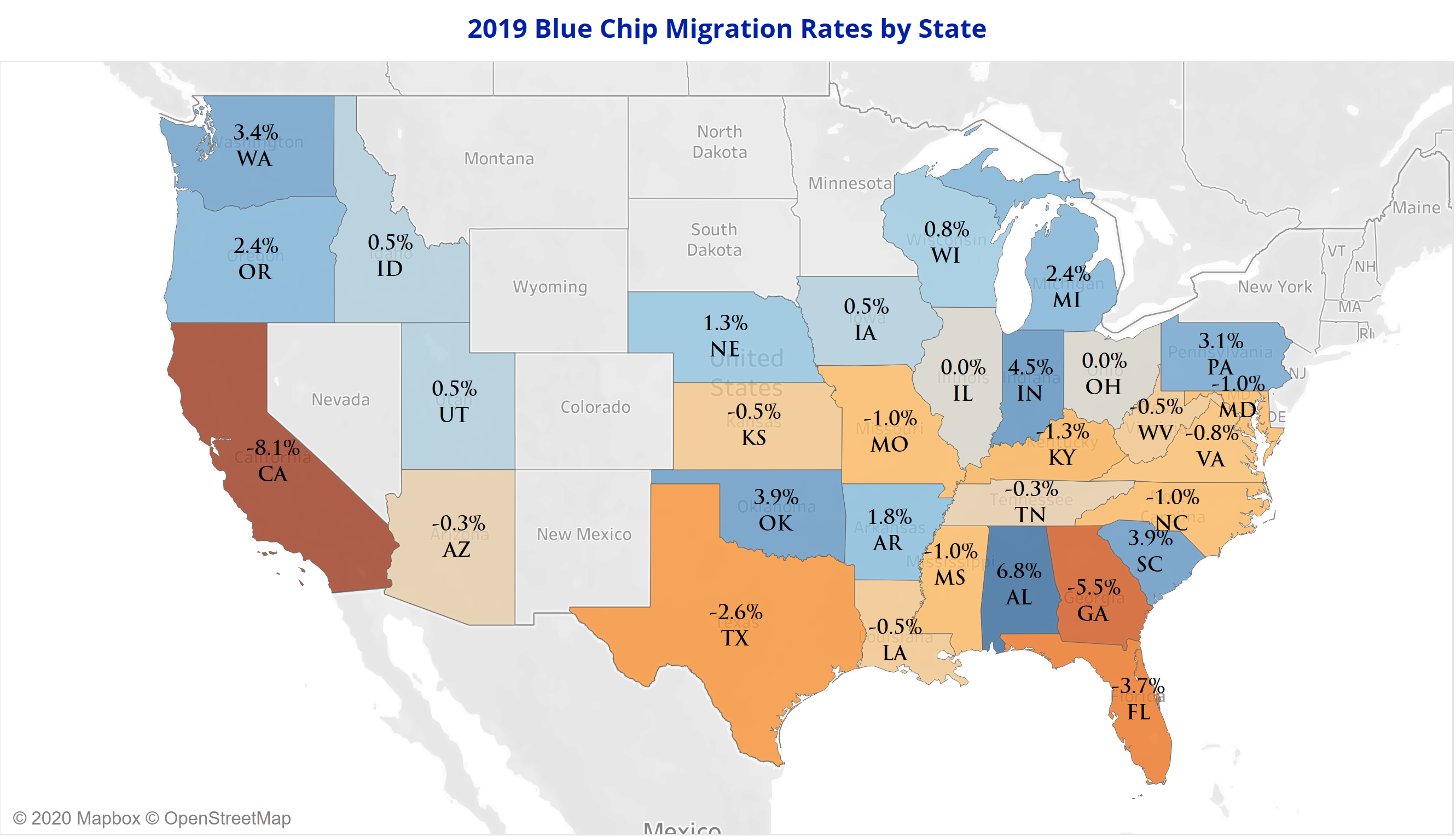 The percentages in the map and waterfall chart represent the net gain/loss for the number of blue-chips for that state. The totals are outlined in the table below. 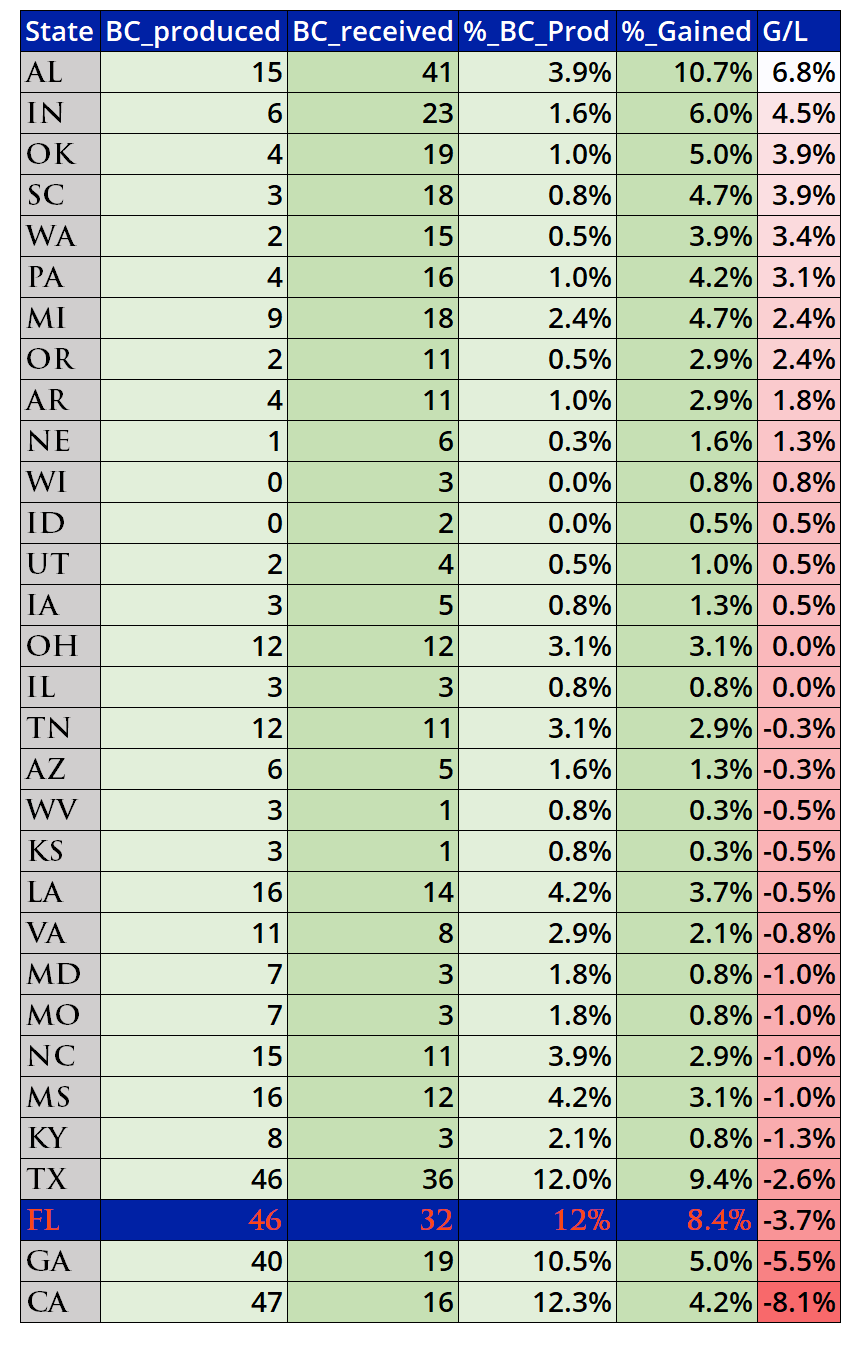 Ultimately, 252 (66%) of 382 Blue-Chips left their home state. Texas, Florida, Georgia, and California had the highest levels of loss. To control for population differences, I then standardized the number of Blue-Chips produced and received and subtracted the produced from received to see how the states did proportionally. 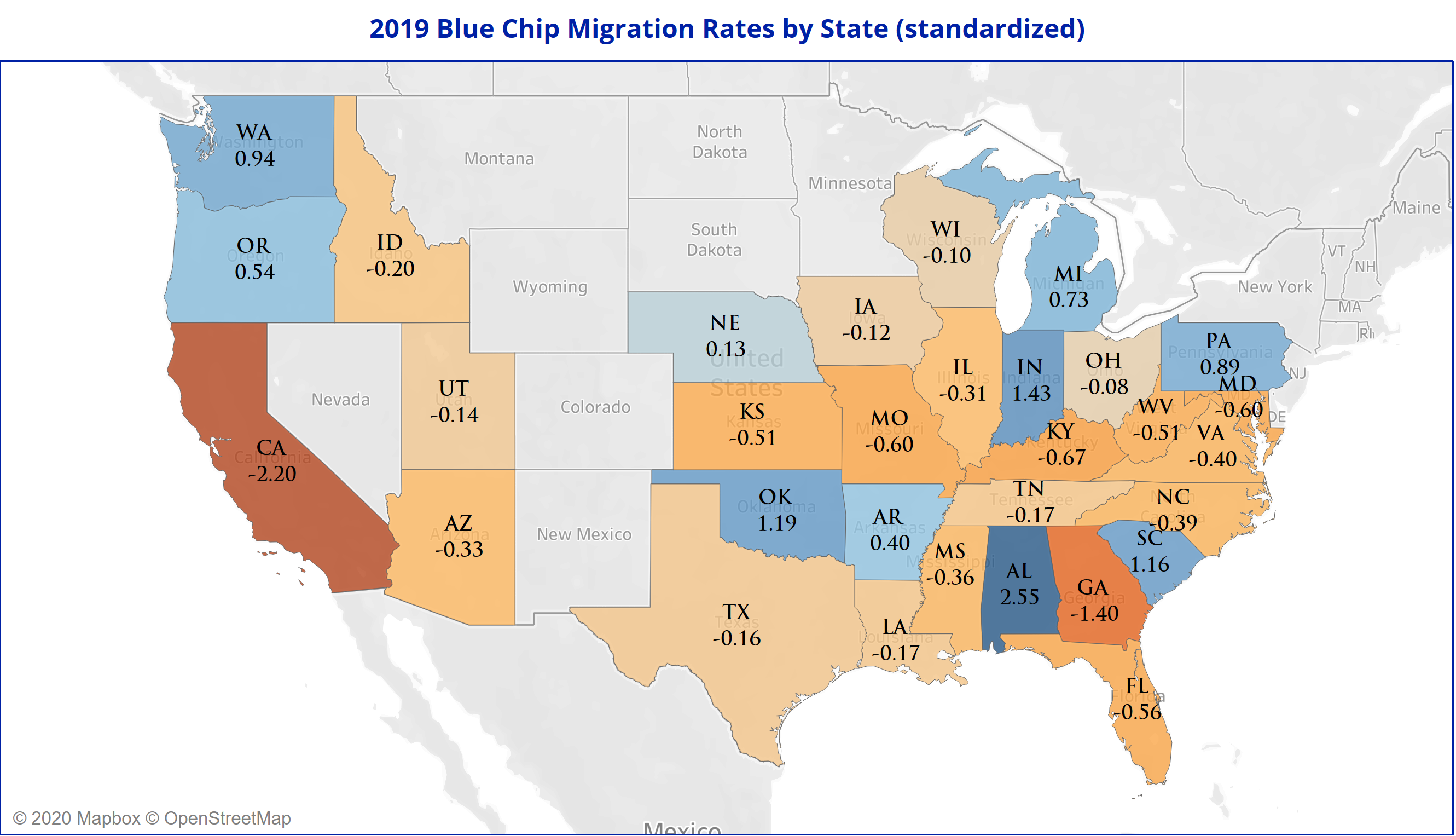 When controlling for number of players produced, Florida moves up some and Texas moves up a bunch.

We can all infer that not all position groups impact the outcome of a season equally. This could be due to numbers (5 OL vs 1 or 2 TE) or nature of importance (QB vs long snapper). I’ve already looked at the correlation between talent level and outcome by whole roster and by offense vs defense. So this time, I just broke the same data down a little further by position groups.

Each scatter plot below has a box that shows the correlation and effect size. The correlation is how closely the two variables (2019 win % and average composite talent rating for that team’s position group) are related. The effect size (technically, a coefficient of determination, but that can be interpreted as effect size in regression) essentially shows how reliable that correlation is. Every relationship was statistically significant at 0.06 or lower. 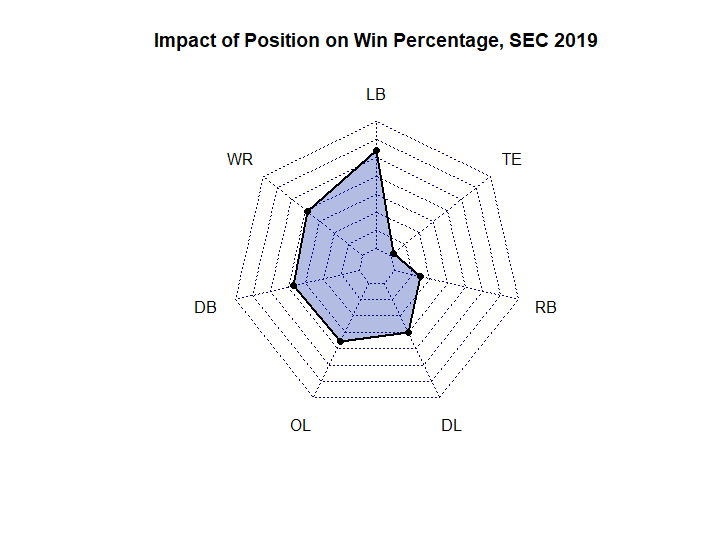 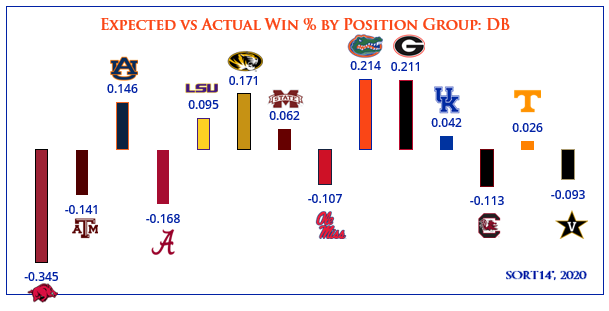 Here is a table summarizing effect size by position 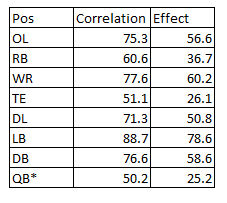 Surprising to me, is that the LB position group had the strongest correlation to win % for SEC teams in 2019. Keep in mind, this isn’t how important a position group is to winning – this is how well the composite rating of that position correlates to winning. Most of us would agree that effective QB play is key to winning. Here is that output visually in a radar graph:

Expectations scores around zero, whether positive or negative should be considered as meeting the expectations. Here is the table with each team’s total:

Looking at each team’s performance relative to expectations by position group is a neat way to peer into how well the on-field coaching is. It is important to note that teams with higher talent ratings will have harder times surpassing expectations and it will be easier to fail expectations. Not surprisingly, LSU had the best on-field coaching performance. Winning all your games and a Natty should cement that. Relative to their on-roster talent levels, Florida was second only to LSU. Imagine what Dan Mullen could do with elite talent… he’s already not far off with the talent he has.

Dan Mullen is one of the best on-field coach in the SEC, and could hit a championship mark if he improves his recruiting. I am skeptical LSU will have anywhere near the success they had last year when they caught lightning in a bottle. I expect Saban and Alabama to return to the top of the West. Georgia can recruit like crazy, but just doesn’t perform up to that talent level. They are a good team, that should be great.

I would focus hand-wringing over recruiting on QB, WR, and LB. The need for an elite QB is a given (though nothing I found here would indicate that, likely because of the small number of rated QBs on a given roster). But if 2020 holds form with 2019, LB roster talent and WR roster talent will more strongly predict win percentage. RB and TE position groups are the weakest predictors. We will see how this holds up in 2020.

Just playing with some numbers, I found that on-roster 3-star count was pretty strongly correlated with regular-season wins for SEC teams in 2019. I’ve done this in the past, and found that it is a pretty consistent relationship.

The correlation is 84%, R-squared is 70%, p-value is <.001, and SE is 1.76. Definitely something to this. The relationship between 3-stars and wins is strong than Blue-Chip count and wins, though it is close. This might just be a slightly different way of looking at the same thing, but I found it interesting.